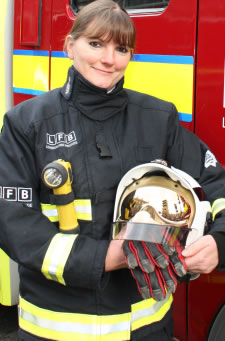 Dany Cotton AC, used with the permission of the NWFS

Dany Cotton is the Deputy Assistant Commissioner for the London Fire Brigade and National Chair of Networking Women in the Fire Service (NWFS). She is also the highest ranking female fire fighter in the British Fire service. I sat down and had a chat with her about the highs and lows of the job and saving Cutty Sark.

What’s the most satisfying thing about your job?

Saving someone’s life, you just can’t be that feeling. I don’t think you can ever compare any other kind of  job satisfaction. You know for anyone who works in a service where you save someone’s life – its got to be the best thing in the world

Do you ever manage to switch off from your job?

Yeah I do, I mean the shifts I do now as a very senior officer I’m on duty now far more than I ‘m ever off duty so the switch off time is far less than it was when I was a firefighter.

That’s interesting because some of the firefighters I’ve spoken to have said they never feel like they are off duty. .

Yeah well if I was off duty and saw something happen I would feel obliged to go deal with it. If I saw someone  fall over in the street or if I saw an accident I would feel obliged to go over and help just because I’ve got the training and that’s what I do . I have stopped to help with a road traffic accident, rendered first aid lots of times. The number of times I’ve stopped and done stuff just because you are trained how to do stuff and why wouldn’t you stop?…because you want to help people.

But I mean how much can you actually do? Particularly without any equipment there?

Even just stopping and being there for somebody who is a state of shock is a good thing, if someone has had a bad thing happen to them just by somebody else being there and being reassuring them is good thing.

Ok on a similar vein, who do you socialise with? Do you have a life outside the fire station? Or are all your friends firefighters?

Oh definitely, well I’ve got a lot of really good friends who are women firefighters and some men, just because I’ve known them so long in the job. My best mate, I’ve known since I was five is a police officer and has nothing to do with the fire service so I have a mixture of friend who are and aren’t connected to the fire service.

What kind of training did you have to go through?

I did sixteen weeks of training which is kind of similar to the amount they do now. You learn everything you need to know in those weeks because the first time they send you out you don’t know where you are being sent. They don’t sift the calls and give you an easy one. It might be a house fire or car crash and you have and you have to deal with it. You’re trained in everything, well as much as they can give you so that are you safe and competent when they first let you loose on the streets.

What was it like going from training to your first call?

Oh you are just the most nervous you have ever been in your life because you don’t know what time the call is going to come in. So you start out on a day or night and you’re nervous and you don’t know anyone and you do all the stuff you are suppose to, you get your stuff ready and you are constantly waiting all day for the bells to go down.

I was lucky I got my first call about 20 minutes after I came on duty to a flooding and so I got my first one out of the way. You’re so nervous you’re going to do something stupid but your training kicks and you just do your job.

Is it difficult dealing with emotional highs and lows of the job?

No not really because when you are at the station you spend your time doing other things, you’re training, making sure the equipment is ready and obviously there are times you relax and eat meals and things. You are also with a group of people, you are never on your own, you have a laugh and a chat and there always is a really good camaraderie amongst the watch so its not like you are constantly sitting on the edge of your seat waiting for something to happen, you are always occupied doing something.  And you have a call, you go deal with and when you come back you have a cup of tea and have a chat about what you did and its sort of from one to the other really.  It’s not like you really feel you are on a high then a low, its more gradual. It’s what your day is.

Look out for part 2 Keeping Tabs On The Men!