Keeping Tabs On The Men 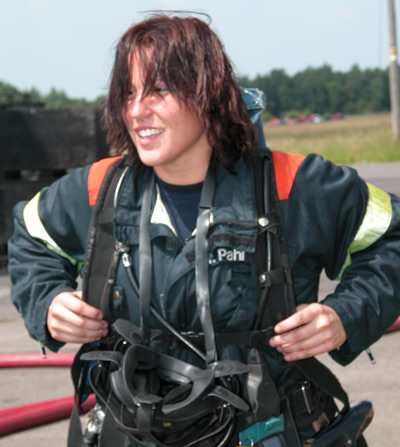 Woman fire fighter used with the permission of the NWFS

You’ve said there was a great camaraderie being on the watch but did you ever have to deal with much sexism being a firefighter?

Well when I joined in 1988 there were just very few woman firefighters so it was difficult then but now I speak to women firefighters and they say they have a really good time. There are always going to be people who are bad whether its men to women or the other way round. But at the time it was just because there weren’t many women fire fighters and so men were suspicious of it.

But I had a really good network of friends and I met up with a  network of  women firefighters and we use to get together and chat .

And now the union has a great group for supporting women and you just find your support where you can and there are days when bad things happen, but bad things happen to everyone so you just go home and talk to someone about it. I talk to women. They say they just have a very good time and just laugh when I talk about some of the problems in the early days.

Oh there was lots of stuff, there was lots of that. You can’t have possibly past the tests, its not a job for women all that. And a lot of it was because fire fighting always been a bit of a macho job and a lot of guys thought if a woman can do it then it’s not quite as macho for them. So it made them less of a hero as a result

And there was this suspicion that a lot of women were sent in to spy on what men were doing and we were keeping diaries and writing notes about them to get them into trouble.

At this point I can’t restrain a giggle at the notion of female fire fighters keeping tabs on their male colleagues. Dany laughs too

I know its ridiculous as if we didn’t have anything better to do!

Check out Part 3 Recruitment and Saving the Clipper